It was back to early mornings as we had an 8:35am flight to Labuan Bajo, a town on Flores island that served as the gateway for most tours departing for Komodo National Park. This is the day I dreaded and eagerly anticipated at the same time, our big outing to see the frightfully large and man-eating Komodo dragons. More on that later.

The trip almost didn’t happen with Doug’s bout of food poisoning, but as this was the one thing he most looked forward to, we had to march on with it. We took a taxi to the airport, where we trudged what seemed like forever to even get to the ticket counter, where we still had to pay for the tickets we’d reserved. We paid in CASH (about $90 per person), but the printer wasn’t working so they hand wrote our tickets. Never in a million years did I think I’d ever have that kind of ticketing experience! Next to us was a woman accusing some locals of stealing her cash, it was definitely a bizarre and sketchy experience. We scanned our luggage although with far lower security standards, had to pay an airport access fee of $2 per person, and then we were on our way.

The flight was short and very beautiful, as we flew low enough to see the islands below us. We passed Komodo and Rinca as part of the national park, but also another island with volcanoes and shallow blue waters surrounding its coast. We landed on a short strip at the only arrival gate Labuan Bajo had, walked to the arrivals waiting area inside, and in lieu of any baggage carousel, “baggage claim” was a section by the entrance where they simply unloaded the bags onto the sidewalk. Leaving the airport was a bit of a mess too as we prepaid a taxi, got a slip, and then upon walking out got accosted by several people but no idea where to pick up our taxi. Finally, we arrived at our hotel, Golo Treetop Inn, run by a pair of Dutch women so it was a nice change to be able to book a trip and ask questions in English.

Our car picked us up at the hotel at 11am, at which point we were taken to the harbor to meet our guide and boat. This was going to be interesting – our guide (who looked like an Indonesian Hines Ward) signaled to us that he was both deaf and mute, while his second in command spoke zero English. The whole trip was a game of charades, but because our captain was used to communicating this way with everybody, we found it easier to communicate with him than the other locals. We first dropped anchor at a small island to go snorkeling, and as I am not the strongest swimmer, I ended up piggybacking on Doug in the water which gave our captain endless laughs. However, it was such a great experience being in such warm waters, and being able to see quite a few colorful fish. I won’t lie, knowing that some of the islands were patrolled by sharks, there was always a twinge of fear…

On our way to Rinca island, we were served lunch aboard, which consisted of nasi goreng with a ton of vegetables. Between Doug’s lack of appetite and the food generally being terrible/sketchy (it was prepared on the rickety boat after all), we really wanted to find a place to dump our leftovers aboard with no luck. It was still a long ride to Rinca island, so by the time we got there at 3pm, we only had an hour to tour what was supposed to be the highlight of this side trip. Upon docking, I was instantly on Komodo watch, looking in both the water (as they are great swimmers) and all around me. Nothing so far…and thankfully we were greeted by a group of rangers when we arrived, ready to take us on. I must’ve asked our ranger five times to ensure I didn’t die on this trip, poor guy. We trekked inland to the park entrance (no Komodos yet), then paid our entrance fees and also had to register (I’m imagining this is incase anything were to happen to us in the park?!). It was at this point where we had our first encounter with a dragon, just slowly swaggering across the pathway, completely ignoring us. Just the way I wanted it. What I learned on our 3 km trek was that Komodos are very lazy, sitting in the shade to stay cool for most of the afternoon, and although they eat pigs, water buffalo, deer, and the occasional human, they only eat about once every month. So with 300 dragons on the island and a rare feeding schedule, I felt safer. This guide was great as he knew all the right places to find dragons and had a keen eye for them, getting us within close viewing distance without disrupting them. We saw about 5 dragons lazing around the ranger kitchen, since they were drawn to the smell of food, and could actually detect smell from over 5 km away. We were also incredibly lucky to find 3-4 more dragons in the wild, which was of course a more rare sighting. 3 of these were mothers guarding their nest, which they poached from wild pigs (lazy bastards), and remained on close watch so we obviously kept our distance! It’s funny though, these moms a super protective of their eggs, but once they hatch (9 month incubation period), the babies head straight into the treetops for up to 3 years to avoid getting eaten by other dragons, including their own mother. We were also informed along our trek that there were 3 poisonous snakes out in the wild in this park, so in case dragons weren’t enough to keep an eye out for, we now had to watch out for snakes. Thankfully, we didn’t see any, but we did see some deer, monkeys, and traces of water buffalo presence (aka their heaping mounds of poop) in the wild. 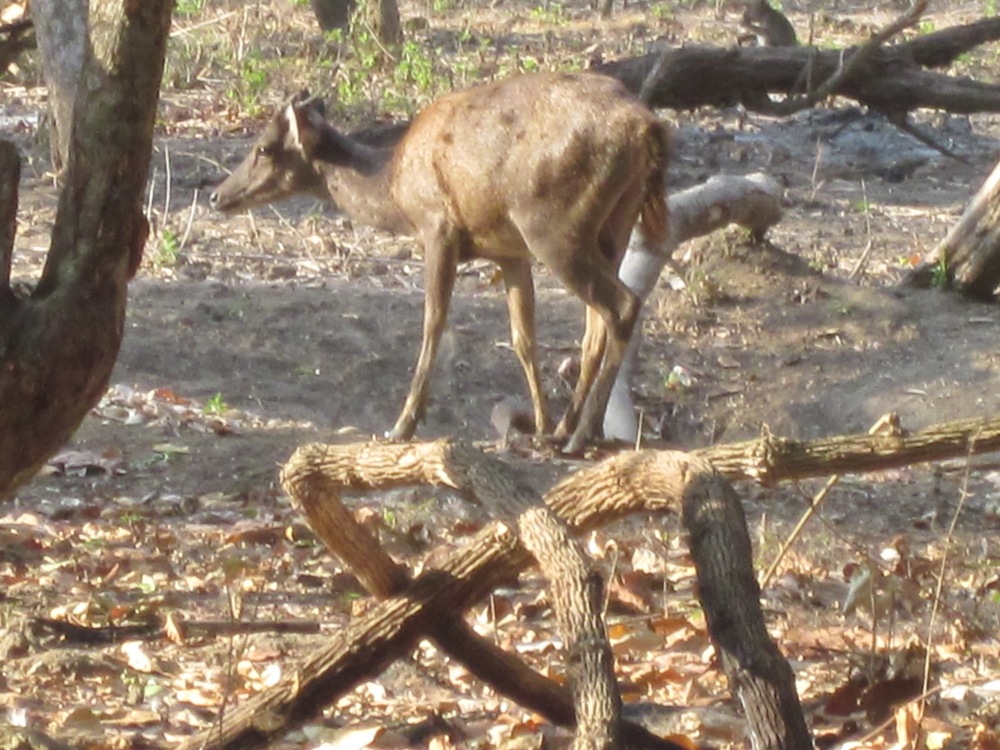 This lucky deer got to live another day, but it must be scary living one’s life in constant fear of Komodos attacking

After our trek, we returned safely (SUCCESS!) to the boat where we took off for Kalong bay about an hour away to see a sunset spectacle. Every evening, right after sunset, hundreds of flying foxes (aka fruit bats) take flight out of the mangrove trees at this particular island. We dropped anchor again, waited patiently for the sun to set, and after the chirping and drones of these bats reached a crescendo, these bats started taking off into the air like a horror movie! They just kept coming and coming, thousands of these fellows for at least 10 minutes straight. Photos and videos don’t do it justice but hopefully these will help…

We spent dinner on the boat (another sketchy meal) and rode in pitch darkness for the remaining hour or so back to Flores island, where we just spent the rest of the evening relaxing as poor Doug was still sick. Definitely a unique once in a lifetime experience today.