One of the additional perks of our hotel was that they deliver made to order breakfasts to your room each morning.  Naturally, we wanted to try a little bit of everything, so we ordered a bread basket with fresh croissants and homemade bread, jams and butter, Greek yogurt with honey and fruit (somehow this tastes way better when in Greece), fresh fruit salad, fresh OJ, frappe, and tea, all delivered to our terrace to enjoy with our view.  Another perk we had to take advantage of at our hotel was their relaxation room, which is booked in advance in order to give couples private access each hour.  Located on another level within the cliffside resort, we had sole access of their hot tub, steam room, and sun deck with fresh robes and slippers.  Definitely a much-needed luxury during our honeymoon that we rarely make time to take advantage of!

On deck today was a half day sunset sailing trip on the Thalassa, a beautiful replica of the schooners hearkening from the 18th and 19th centuries.  We were picked up by a shuttle that transported us to Athinios port, where we then boarded our sailboat.  Today’s itinerary would begin with a stop at Nea Kameni, still the center of an active volcano.  Greek for “new burnt,” Nea Kameni is the younger of the two islands that were created from the various volcanic eruptions in the past.  They were actually created following the massive eruption of 1630BC, which caused periodic outpouring of magma to form an underwater volcano, building enough layers over the following centuries to push the flow above sea level, eventually creating Nea Kameni.  Hiking on top of this uninhabited volcano, our guide informed us that the last eruption was only 66 years ago, and the volcano is indeed due to erupt again, likely in our lifetime.  So if we saw water bubbling and heating up, and dead fish floating around, we needed to get out of there…fast!  We spent some time hiking up the dried lava trail to reach the crater, which we could walk around, and also enjoy a lovely panoramic view of the other islands of Santorini.

We then took a short detour to Palea Kameni, “old burnt,” the first island resulting from the massive eruptions of the past.  The water was both warmed by the steam coming out of the crater, and fortified with minerals from the lava, which made it an ideal location for us to jump into to enjoy the hot springs.

Following a dip in the hot springs, we set sail once again to another island in Santorini called Thirassia. Unlike its bigger sister, the population of Thirassia was only 250, with far fewer tourists. However, it was a lovely place to drop anchor and as our guide proclaimed, one of the nicest places to swim. So we took a dip again here as the crew prepared some meze for us. When we came back on board, we had some local white Santorini wine, dolmas, meatballs, tzatziki, cheese pies, and pitas waiting for us. We snacked and enjoyed basking under the warm Mediterranean sun until it was time to set sail again, this time near the northern tip of Thira to get THE BEST view of the sunset in all of Santorini. We beat the crowds of Oia, overcrowding the walls of the town, and instead had an unobstructed, peaceful view of the sun setting over the Aegean. While drinking wine on the house. It handily won as best sunset on our trip. Right around this time, one of the crew busted out a saxophone and started playing music as the sun was setting so it really was an unforgettable moment.

Once the sun went down, it was time to head back to land. Our guide, always full of useful information and experiences, decided that this would be a great time to tell some stories and teach us what she cleverly dubbed “Greek Zumba.”  She managed to get all of us, of all ages and nationalities, to get on the main deck, link arms, and dance the traditional Greek dance by kicking our legs up can-can style, crossing them over each other, and going in all sorts of clockwise and counterclockwise directions. Opa!! 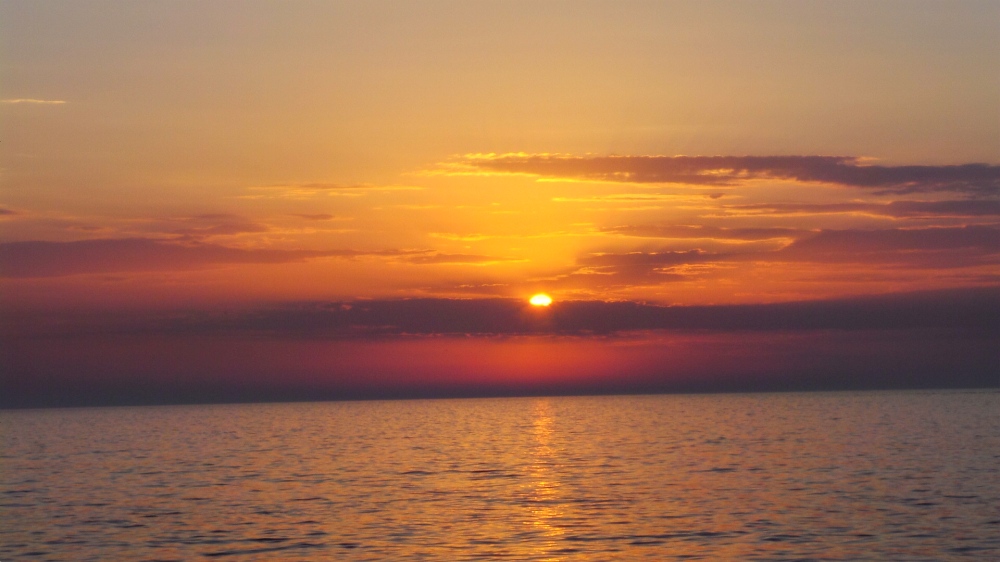 Back on the mainland, we decided we hadn’t had enough food on the boat (even though we arguably had, just wanted to keep trying things), and ventured back into Fira Town for a casual bite.  Doug was craving gyros again, so off we went looking for Greece’s version of fast food.  We found a super casual spot, aptly named “Meat Corner Grill,” where we ordered a spread of Greek salad, more tzatziki, a gyro platter for me, and gyro sandwich for Doug.  Yummy meal that hit the spot, and cleaned it down with some refreshing Alpha beers all for under $20.

It had been a pretty long day by this point, but we wanted to check out the nightlife in Fira before the long walk back to our hotel.  Surprisingly, most of the bars in town were pretty packed and felt clubby, which wasn’t exactly the mood we were in, so instead we found the famous Franco’s Bar and grabbed a drink there.  It was the exact opposite of “clubby” and probably a bit too chill as we nearly fell asleep, sitting on lounge chairs facing the sea, under the stars listening to classical music.  Clearly, by that point, it was time to walk back (still 30 minutes uphill!) and call it a night.