This is what Francisco coined Day 3 because we saw some of the most spectacular scenery and ruins during what would be our longest day of hiking, going 10 total miles.  Somehow it didn’t seem so painful or long when you’re surrounded by so much natural beauty.

We woke up at 6am yet again, and went through our routine of coca tea and breakfast.  I actually woke up less well rested and extremely dizzy…could I be getting a bad bout of altitude sickness?  I didn’t want to risk it, and thankfully Team UWS had spare altitude pills so I took one.  I think it helped but I couldn’t feel my extremities the entire day which was really trippy.

We stopped more often today as there were many more sites that had been discovered that Francisco would stop to explain to us.  The first stop, Runkurakay (“egg shaped”), was fairly early into our hike.  Here, we learned about the importance of Cusco as the heart of the Inca empire, with lifelines north/south/east/west to Machu Picchu, Arequipa, Lima/Ecuador, and Bolivia/Chile/Argentina.  The various Inca trails served to connect these cities to Cusco, with runners carrying messages in a mere 4 hours (shouting does wonders) and goods in 4-5 days, relay style.  We talked about the importance of Qoricancha, the sun temple we visited back in Cusco, as the pilgrimage site where people would bring their best wares – colored textiles, ceramics, alpaca wool – to offer to the sun god.  It was here where we picked up our own offerings, a rock of our choice, to then take to the next summit where we would then make a wish.

We went a total 1000 ft up to the summit, followed immediately by another 1000 ft down.  On the way down, we saw two more important sites, Sayacmarca (“inaccessible town”) and Conchamarca, where they discovered shells found from as far as Lima and Arequipa.  We learned here that the governing law during the Inca times was based off of three tenets: don’t be lazy, don’t lie, don’t steal.  With the Inca Trail being as long and steep as it was, it was impossible to be lazy!  Except for maybe the Inca king, known as the son of the sun, who was carried on the Inca Trail anytime he had to leave his residence in Cusco to do business in Machu Picchu.  It was typically the royal children (Inca kings could take on many wives) that lived in Machu Picchu and attended some kind of higher level education.  Anyone who broke the one of the three tenets was placed in a jail filled with snakes.  As the symbol of wisdom, these snakes determined one’s innocence and fate – if you lived, you were innocent; if you were bitten, well, you must’ve done something wrong.  Ladies and gentlemen, the Inca death penalty system!

The morning’s hike was one of the most spectacular we’d seen, with breathtaking vistas that tumbled into mossy forests.  We took a quick lunch break right after arriving at Conchamarca.  Thankfully, today wasn’t nearly as brutal in terms of altitude, but it was nice to get a break knowing we had the longest distance to travel today.  Following lunch, we reached our third summit, and shortly thereafter arrived at another stunning set of ruins, Phuyupatamarca, aptly named “above the clouds.”  This particular site featured multiple wells serviced by aqueducts, and the belief was that many of these houses belonged to the military, whose windows faced Machu Picchu and could provide for faster communication.  The afternoon’s hike was aptly named “Tourist Killer” due to the crazy number of steep, uneven, narrow steps down, down, and down some more.  It definitely did a number on everyone’s knees!

Francisco gave us two options for how to finish up the day – the first was about 10 minutes longer and though it had a good number of steps, was a gentler decline and had nice scenery.  Option two was a bit faster, with multiple switchbacks that would result in steeper steps.  Since we’d been walking for a good 8 hours already, what was the difference of another 10 minutes for better scenery.  Boy were we in for a treat…when we reached the opening through the forest, we were greeted with ancient ruins of agricultural terraces built right into the mountain, with a view way down of our campsite next to the Urubamba River and even glimpses of civilization – the train to Aguas Calientes!  We saw a few llamas grazing here and had the opportunity to walk through these terraces, descend down “Inca stairs,” and take a few silly pictures.  Of over 400 important cities in Inca history, it’s unbelievable to hear that only half of these have been discovered… 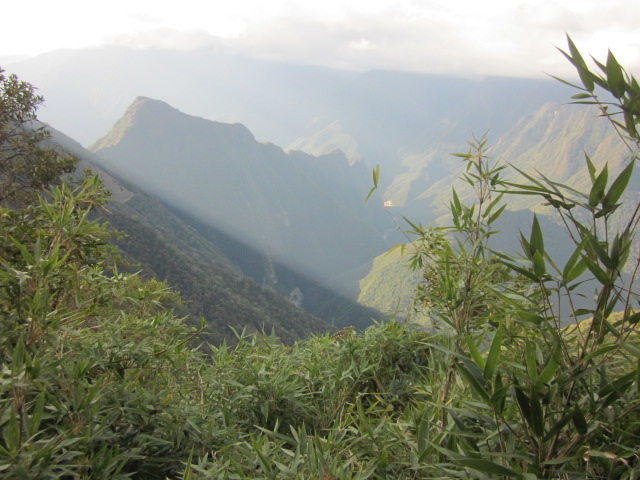 Because we had a chance to stop and really take in each of the many sites we came across today, our day got extended by quite a bit.  It was the first time we arrived at camp after the sun had set, so thankfully those headlamps came in handy.  Back at our camp, Winay Wayna (2700m/8850 ft), we were greeted with some well-deserved snacks as we awaited our last dinner on the trail.  It was finally time to break out the pisco that Doug had carried over the last 3 days – by some miracle, our cook had the ingredients (lemon, egg whites, bitters) on hand to make pisco sours, so we whipped up a batch for us all to share as we celebrated our last night together and said bye to our all-star porter crew.