5:15am – wake up call. What the hell vacation is this?!  I digress…yes yes it was all worth it.  At 6am, our Pachamama shuttle was outside waiting for us, along with Francisco, our tour guide.  After multiple stops to pick up the other 4 hikers, several porters, and a key stop at the outer Pachamama office for ALL of our goods (tent, food, propane, sleeping bags), we were finally on our way.  We first made a stop at Ollantaytambo, a village on the way to the start of the Inca Trail within the fabled Sacred Valley, for some coca tea and breakfast.  I’ll be honest, I felt awful – I felt a cold coming on and had zero appetite.  In retrospect, some of this may have been due to an oncoming cold or the forewarned altitude sickness, or oh, maybe the hour of being locked out in the freezing cold two nights ago.  But this was the Inca Trail, something I had been looking forward to for the last 5 months, and nothing was stopping me!

Next, we were off to Km 82, the official start to our hike.  Today, we were to go 7 miles through relatively flat terrain with the occasional hills.  We later found that the entire first day was actually not the original Inca Trail, as it was just another trail that was created to easily connect from civilization to the real Inca Trail located much deeper into the mountains.  We started off following the Urubamba River, which was flowing much more lightly due to it being the dry season.  A quick word about the weather – since Peru is below the equator, it was technically winter.  However, with Peru being so close to the equator, it was still hot during the day, but the winter/high altitude resulted in some very chilly nights.  So we basically experienced all 4 seasons in a day on our trek, thus having to pack our day packs accordingly.

Now, onto the trek…I believe (didn’t have a watch and it was senseless to turn on my cell phone) we started around 10am, first going through the checkpoint at Piskacucho (2600m/8500ft above sea level) and getting our Inca Trail stamps in our passport, then crossing a very wobbly hanging bridge over the Urubamba River.  The beginning of the hike was a gentle slope through dusty, dry brush, occasionally being passed by porters or mules as we were still going through habitable villages.  We did see one incline across a bridge we had to cross and panicked slightly – little did we know, that was NOTHING compared to the next few days!  But, it was a great warmup through a total 1300 foot altitude change, and through three sets of ruins in the morning. 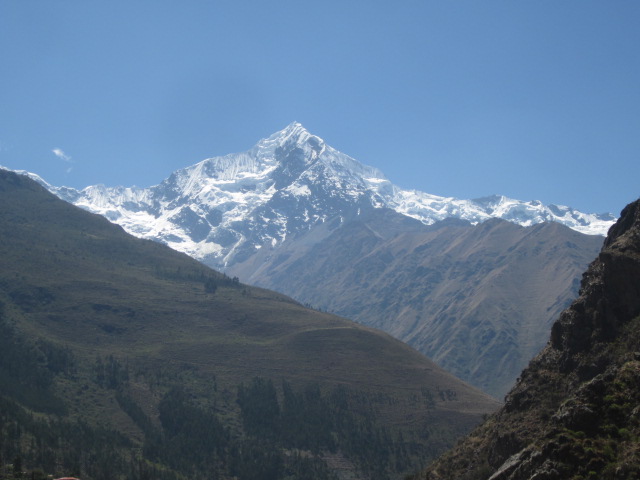 We stopped for lunch shortly after passing Llactapata, a significant set of ruins dedicated to the sun god (as many of these ruins were) where we learned that Inca royalty lived higher up to be closer to the sun god, while the “commoners” lived much farther below in different towns to cultivate food and other goods for their royalty.  Though I still didn’t feel well and lacked any appetite, that didn’t take away from how great lunch looked, especially for something that was hand carried and whipped up in a tent in the wilderness.  Every meal came with soup to start with, so we had some corn soup before they served us grilled trout and rice.  I was so exhausted from general lack of sleep that I passed out right there after lunch, while we waited for the porters to pack up and get a head start.

I never felt the same after that – basically felt like I sleepwalked through the remaining 2 hours post-lunch to get to our campsite at Wayllabamba (“grassy plain,” 3000m/9850ft).  As the last inhabited community on the Inca Trail, Wayllabamba’s setup was cool because each house could “rent out” their backyard as a campground for each different trekking group, which was subsidized by the government, and gave us a sense of our own private camping space for our group.  It was also my favorite because it was the only campsite to have a normal (albeit still gross) toilet in their outhouse as the others were purely squat holes.  We arrived at 4:45pm, a bit before sunset, which gave us enough time for an Inca shower (aka using aloe wipes to wipe down and no-rinse camping shampoo that I brought).  We quickly learned it was easiest to do all this and change into our PJ’s upon arrival, before the temperature dropped and we lost daylight.  Dinner consisted of more soup – this time a semolina soup topped with “sexy sauce” (insert Francisco’s heh heh heh here) which was a salsa made of tomatoes, red onions, lemon, and salt.  We also had some chicken, pasta, and bananas sauteed in a buttery vanilla sauce, and by 8pm, it had already gotten dark and it was lights out.  With my sleep deprivation today, I had no problem falling asleep under the stars for my best night’s sleep yet!